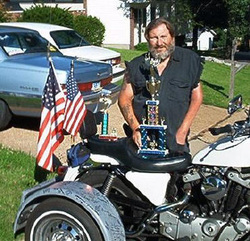 Before Thunder was transformed into a U.S. Flag, I rode around collecting autographs from friends, fellow riders and even strangers on the primers fenders and back plate. I told all that when the primer was covered with autographs she was going to be painted as a U.S. Flag for my Patriot Guard Riding

In those days, I entered her in 3 bike shows. The first one I entered her as a Sportster and she got 2nd place. the seco2nd show I entered her as an Ironhead class and she took 1st place. The third show she was entered as a trike and took 3rd place. Once thunder was painted, I have no longer entered her in any biked show. She was painted to show honor and respect for our military and I do not feel she needs to be in any show. 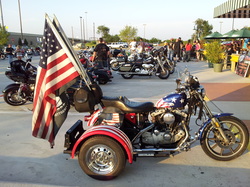 Thunder looks good no matter what she is doing, even sitting still.  This is at a local bike night event in Plano, Texas. 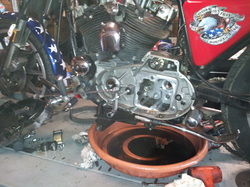 October 2013. Thunder gets her bottom end opened for the first time in 34 years! I replaced the original clutch pack and three of her four gears. The gears were okay, but showed some signs of wear and one little bad spot that could cause a problem if the tooth broke.  So I don't have to get into the bottom end for another 34 years, I just replaced them. What other machine do you know of that can run hard daily and not have to replace the clutch or any tranny work in over 3 decades?? Ironheads rule!!!!!!